The City of St. Augustine Avenida Menedez Seawall Project is the culmination of more than a decade of work by many people 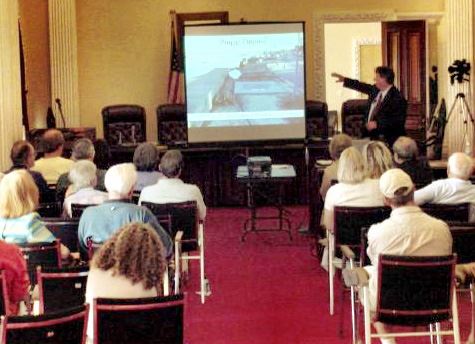 working many hours on research, grants, archaeology, and history to make the project a reality.

It all began in 1999 when city officials first sought funds to repair the seawall after damage from Hurricane Floyd. Dozens of public meetings and workshops were held and the St. Augustine City Commission spent hours in hearings to gain federal support for the project. The city missed a deadline for a Community Development Block Grant (CDBG) in 2001 because of a lack of matching funds, but the team trod on, continuing to work with the Florida Inland Navigation District (FIND) for conceptual designs in 2002. 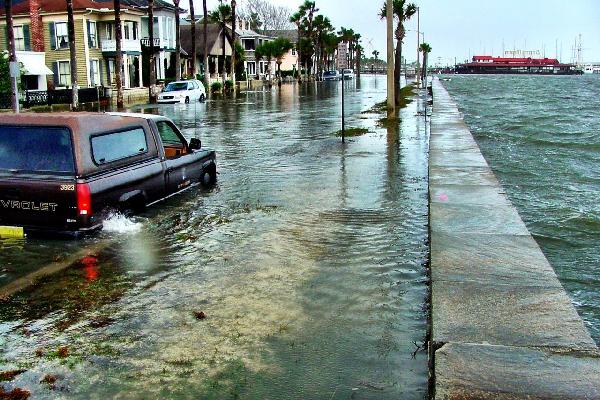 In 2008, Tropical Storm Faye proved to be both a curse and a blessing, causing additional damage to the seawall, but opening the door for qualification for the Federal Emergency Management Agency’s (FEMA) Flood Mitigation Assistance Grant program.

In early 2009, the city completed the Environmental Assessment and executed the Memorandum of Agreement that allowed FEMA to move to the next step of awarding the grant to the Florida Department of Emergency Management (FDEM) who in turn made the funding available to the city in 2011. FDEM received the award letter from FEMA in August 2011 and the city went on to accept the grant and move forward with this important project to rehabilitate the seawall, protect the surrounding area from flooding and transform the face of the city waterfront.

During a public informational meeting in October 2011 about the project with representatives from the city’s Public Works Department, Taylor Engineering and consultants, the public was able to see diagrams and artist’s renderings of the project, details of the scope of work, the construction schedule and to ask questions.

The seawall—blocks of coquina capped by slabs of granite—separates Avenida Menendez and Matanzas Bay and has protected the downtown from flooding for nearly 170 years. The portion of the original seawall north of the Bridge of Lions was lost to the widening of state Highway A1A in the 1950s, but the section south of the municipal marina remains intact. Its preservation and rehabilitation will ensure that it continues to function as a flood prevention device and that its historical significance is preserved.

The preservation and rehabilitation plan includes the construction of a new barrier, like a new sea wall, twelve feet out into the bay from the current sea wall. This will encapsulate the historic sea wall, protecting it, but leaving it exposed along the top so that it becomes a significant part of the new park. Construction is expected to take approximately one year.

Importance of the Seawall

The sea wall’s importance in flood protection is indisputable as is its historical significance. But it is also important for its aesthetic contributions to the city and the quality of life. In part to alleviate some concerns over “just what will it look like,” Taylor Engineering developed some point-of-view rendering of before and after in the vicinity half-way between the Municipal Marina and the Florida National Guard Headquarters. 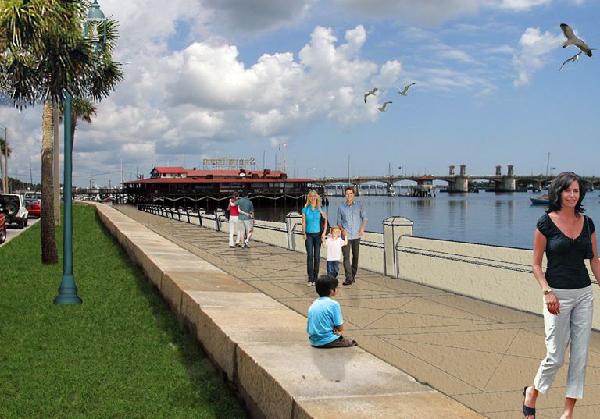 The original seawall was made out of coquina—a soft limestone of sand and broken shells—which is laid in ashlar stonework, topped with granite stones, and supported by massive coquina foundation stones. Found along the eastern coast of Florida from Jacksonville to Palm Beach, coquina’s perviousness makes it easy to mine; that’s why the Spanish and American seawalls were made of coquina.

But the new Seawall being constructed 12 feet into the water from the old wall to protect the original historic structure uses concrete and reinforced steel. The gap between the two walls is being filled in and paved so it can once again serve as a waterfront promenade with a paved walking path, new streetlights and landscaping.