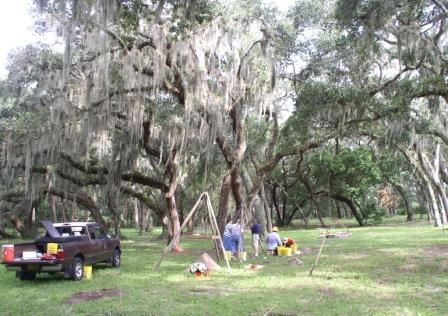 Situated along the northwestern shore of Anastasia Island, the Young Avenue Site has been occupied intermittently for more than 3,500 years. The site is located in a parkland-like setting flanked by a dune ridge on the east and marsh on the west.

Estimated at approximately 15 acres, the site is located near a natural freshwater source as seen by the occurrence of sedges and cattails along the bank of the marsh.

Based on a series of investigations undertaken by the City’s Archaeology Program in 2007 and 2008, the Young Avenue Site is considered to be the best example in the St. Augustine area of a Woodland Period occupation (i.e, circa 500 B.C. to A.D. 900).

Originally discovered in early 1951 by Dr. John Goggin (University of Florida), the Young Avenue Site was situated at a bend in a road, then known as Young Avenue - the site’s namesake.

Based on ceramic artifacts recovered, the site was identified as dating to the St. Johns II Period (A.D. 900 to 1565). Shell deposits along the road cut bank suggested that the site was approximately 200 feet in diameter.

For the next 56 years, this was the only information documented in the Florida Master Site File for what appeared to be a typical small St. Johns II site along the banks of the extensive estuary to Matanzas Bay.

City investigations at the Young Avenue Site were conducted in response to the remodeling of existing single-family residences. These investigations have substantially altered our understanding of this site through the examination of eight different project locations.

Three distinct periods of occupation are represented, each era associated with the Native American group. The periods are:

The most prevalent time period, based on the ubiquity and distribution of archaeological features and artifacts, is the Woodland Period, which covers much of the Young Avenue Site area. Concentrated in specific locations, but just as important to our understanding of St. Augustine’s prehistoric and historical past, are Late Archaic and Colonial deposits. Each period is discussed separately.

Late Archaic deposits are defined when fiber-tempered pottery (i.e, pottery with vegetation used as a tempering agent) is found. The firing of soft-pliable clay vessels into sturdy bowls causes the vegetal material to be burned off, resulting in a porous (vesicular) container.

Other species encountered include various aquatic species (fish and turtle), birds, and deer. This occupation also is the deepest documented; in some locations, a distinct lens of aeolian (i.e, wind-blown) sand separates the Late Archaic from Woodland occupation.

Archaeological evidence associated with the Late Archaic Period at the Young Avenue Site was documented in two project locations, both of which were near the banks of the existing estuary. The two spatially distinct activity areas contained trash deposits and probable fire pits.

Trash deposits consisting of food remains and broken pottery were found in pits and as sheet scatters. Possible fire pits are represented by solidified, carbonaceous deposits that have been cemented by caliche - a calcium-carbonate created by the decomposition of the shell. Caliche capillaries extended from the carbonaceous deposits into coquina shell beds below the features.

It is uncertain whether these two activity areas, separated by about 300 feet, are contemporaneous or were occupied at different times during the course of the approximately 2,000 year-long Late Archaic Period.

Defined based on a diverse assemblage of ceramic types (e.g, St. Johns Plain, Deptford, Swift Creek, and Colorinda), the Woodland Period is a continuation of Late Archaic subsistence practices that focused on the exploitation of coastal resources. Instead of coquina shell and moon snails being the primary dietary staple for the Woodland, oysters, and quahogs (clams) are dominant.

Also, pottery is much more abundant than in the preceding period. The presence of non-local ceramic types indicates that the site occupants participated in trade networks, which extended throughout the Southeast during this period.

Archaeological deposits associated with the Woodland Period represent the most extensive use of the site - they are found in all eight of the locations excavated. The remains of houses, trash pits, and miscellaneous pits indicate that the site was, in all likelihood, a village occupied year-round. Shell midden deposits consisted of distinct lenses of either oyster or quahog, suggesting a bi-seasonal strategy in the gathering of bivalves. 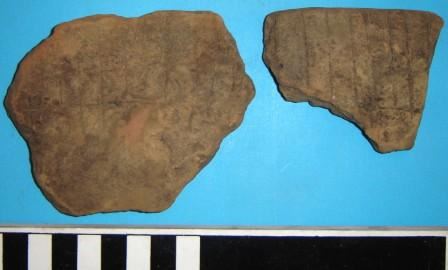 Two styles of house construction were identified during the Woodland Period: small circular/ovoid residential structures and large square-like communal or ceremonial structures. The one small house, where size could be estimated, measured approximately 15 feet in diameter, or 175 square feet in area.

In contrast, the hypothesized communal structure is four times the size, measuring 26 feet per side, or 689 square feet in area. Unlike the smaller structures that lack a diverse artifactual assemblage, the large structure contained an assortment of different pottery types suggests that it may have represented a center where non-local goods entered the village. Variability in design motifs on St. Johns Incised pottery at the smaller structures suggests the possibility that pottery types were marked according to clan affiliation.

The city’s colonial-era history is not limited to its historic downtown districts or the Menéndez encampment site. Scattered colonial archaeological deposits have been documented in the greater St. Augustine area - some dating as early as the late 16th century.

One of these locales is Anastasia Island, which has evidence of European occupation and use since shortly after the City’s founding in 1565. Of particular note in the island’s history is the active quarrying of coquina stone, which began in 1672 with the construction of Castillo de San Marcos. Coquina stone - formed by the mineralization of coquina shell - also had been used for the construction of a powder magazine in 1598 and occasionally used by residents of St. Augustine to construct wells and components of buildings since the early 1600s.

The Need for Assistance

To quarry the stone, especially during the construction of Castillo, the Spanish crown needed the assistance of Native Americans from throughout the province of La Florida. These individuals were conscripted through the repartimiento (i.e, a forced labor draft) placed on the mission system by secular authorities. Along with others from throughout the Spanish empire, some of the Native Americans individuals worked at the fort, whereas others quarried the stone. 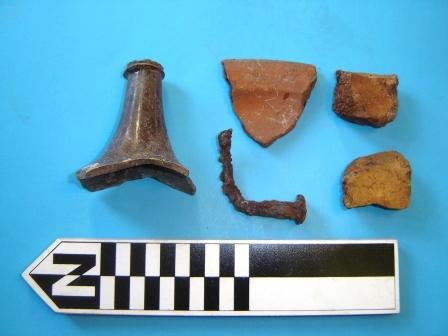 Archaeological evidence for Colonial-era historic artifacts -  was found in two project locations, both situated along the base of a dune slope that flanks the eastern portion of the Young Avenue Site. One consisted of a large trash pit that contained dense deposits of both oyster and clamshell, numerous gopher tortoise bones, bovid (cow) bone, and historic artifacts, including a partial Colonoware bowl. Colonoware is Native American pottery manufactured in the shape of European vessels. Scattered around this trash pit were additional historic Native American pottery types. 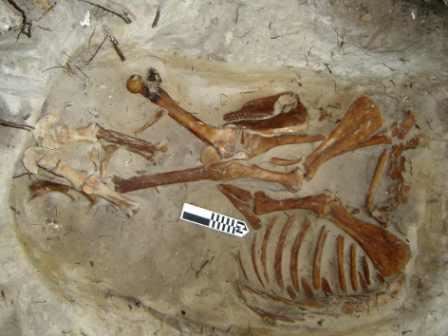 The other feature was a burial pit containing the remains of a donkey, whose limbs had been disarticulated and then placed on top of the torso. A conventional radiocarbon date places the burial at A.D. 1650 plus 40, or around the time the Castillo de San Marcos was built. This discovery is interpreted as a ritual buried, which followed Native American customs. Also recovered nearby were Native American potsherds that would have been used into the mid-17th century and post holes - remnants of a structure.