Fireworks Over the Matanzas 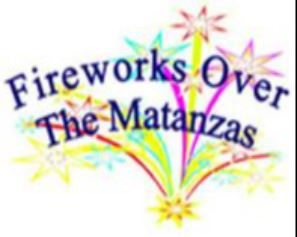 Holidays are built around traditions and few holidays have more great family traditions than the Fourth of July: great food, outdoor band concerts, a day with friends and family, and of course, fireworks! They all come together in a grand celebration, and there’s no better place to celebrate the nation's Independence Day than in the Nation’s Oldest City and no better way than Fireworks Over The Matanzas.  Looking for parking information? Or just the shuttle map?

Starting at 6:00pm one of the region’s most popular big bands, The All Star Orchestra, returns to the Plaza de la Constitución for a two-hour show filled with big band and swing music along with all the traditional patriotic favorites. The All Star Orchestra’s performance from the Plaza’s Gazebo runs from 6:00pm until 8:00pm. The concert is free and those attending should bring lounge chairs for seating.

Fireworks Over The Matanzas, the highlight of St. Augustine’s traditional July 4th activities, has become synonymous with celebrating Independence Day in the Nation’s Oldest City. The spectacular aerial display of pyrotechnics high over Matanzas Bay begins at 9:30pm.

The 20-minute display is tightly choreographed to a stirring soundtrack of great popular and patriotic music delivered over an extensive sound system transforming the entire Bayfront between the Castillo de San Marcos National Monument and the Bridge of Lions into a theatre of sight and sound (view a Google map).

For over two decades Fireworks Over The Matanzas has been produced by Fireworks by Santore, a company based in nearby Flagler County, that’s been in the fireworks business for over 125 years.